Palinuro cape, in the heart of Cilento, stretches with his cape with the characteristic shape of pentadactyl (5-fingers) in the unpolluted sea of ​​the Cilento coast, in one of the most beautiful coastline of the entire Campania, with its falling rocks sharply to the sea from heights of over 50 meters, overlayer from the lighthouse, one of the most important of the entire Italian coast, and nearby weather station.

Among the rocks of the cape, several species of birds nest and grow unique plants, such as the "primula" primrose of Palinuro, that only between these rocks has found its habitat.

The real treasure, however, Palinuro hides beneath the surface of the waves, thanks to a huge amount of natural caves and hollows, less than 32, which makes it a paradise for divers.

Not to be missed, above the water level can be visited by boat, the Blue Grotto, named for the spectacular reflections of light on water, the cave of silver and the sulfur, which contains a source of sulfur water characteristic odor. 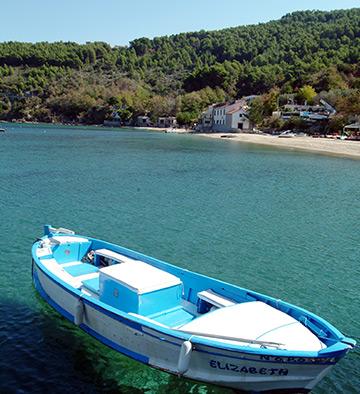 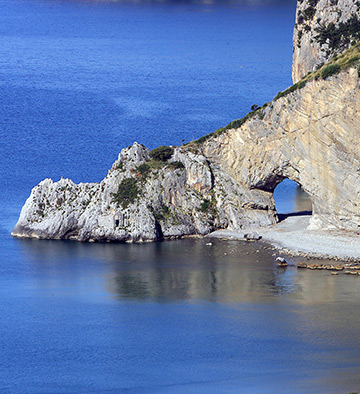 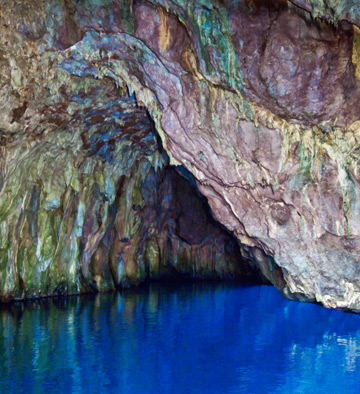 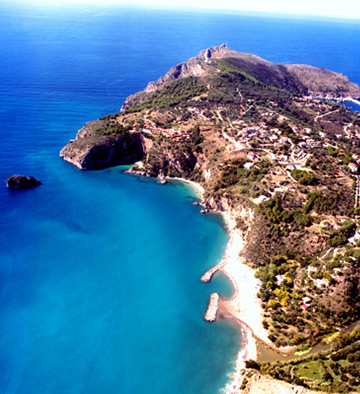 The caves of Palinuro

The Blue Grotto
Is the cave most known to tourists and the easiest to get by boat, just outside the harbor of Palinuro, and is therefore the most visited, also thanks to the spectacular play of light that can be seen on the surface of the water, which magically, especially at certain times of the day, is colored by an intense blue. The maximum depth of the cave is 33 metri.La morphology of the cavity is very articulate. On the north side of the main tunnel opens a side branch, with fangolo backdrop, a sharp slope that ends after 18 meters of the trail at an altitude of 15 meters. Sud.est side of the central hall and at the end of the main tunnel opens the great Hall of the Snow.

The Cathedral
Large cavity flooded with 4 domes indoor air. And 'moltolavata from the sea conpavimento liscioe poor pareti.Dopo life on an underwater path, one emerges into several sub-aerial cavity. You may notice some phenomena related to the cave, such as dwarfism of certain organisms compared to other conditions and depigmentation of the sponges of the genus Petrosa. This cave is characterized by interesting forms of concretions.

The purple grotto
The cave is part of Viola cavity included in Cala Fetente (the cove characterized by the sulfur springs that determine the characteristic odor hence the name). Its name is due to the patina of manganese immediately above the water of inland lakes, which in part reflects high and dry in the light of underwater striking shades of purple. The cave consists of a first submerged room with the bottom - 14 feet with pebbles and sand with ripple marks and cross strewn with blocks of collapse. The time was up in three points above the sea level where it forms three small domes with air rich concretions. The second room has a silty bottom. Risalendosi meets a - 7 meters milky sulphurous water that reaches the surface. You emerge in a lake carpeted with stalactites, stalagmites and small branch underwater colonne.Il very low and muddy and full of sediment that makes her dangerous path. The path ends in a crack between boulders collapse which seems to escape the sulphurous.

Hall of snow
The Great Hall of snow has dimensions of 26 x 45 meters. On its floor there is an area with 3 depressions in the shape of a tunnel with a height - 17 meters - 23 meters and flanks covered with small pebbles and boulders. From one of these depressions out the sulphurous principale.Da this main source out a stream of sulphurous water that rises, visible, vertically with a diameter of about 70/80 cm. And an estimated speed of 15 meters / minute. And a substantial flow of water that goes to accumulate, to a lesser density, under a sort of dome in the upper part of the room. Here you aduna a layer of sulfur water (temperature + 24 ° C) above normal sea water. The walls are concerned by sulphurous covered with a thick film, sometimes frayed, white sulfur bacteria and flakes that fall from the ceiling due to the bubbles discharged from subacquei.Di the effect snowfall here!

The beaches of Palinuro

The fossil dunes of the beach / "saline" - salt flat (which overlooks the Camping Saline)
In Saline you can admire spectacular examples of fossil dunes that form a natural environment very unique, populated by plant organisms which together constitute a unique plant communities, extremely sensitive to anthropogenic disturbances and, therefore, to be protected. The town beach is also characterized by stretches of rock with a cliff that forms the characteristics baths in which the heavy seas provocal'accumulo of water which then evaporates, leaving the typical salt formations that gave the name "salt" in this section of coastline. It 's the closest beach to the town of Palinuro, easily reachable on foot paths through specially created.

Marinella beach
Perhaps the least known of the beaches of Palinuro, lies at the mouth of the river Lambro, set in a rocky valley. E 'reachable from the country through a steep staircase that leads from the top of the hill to the sea, or a walking path along the valley of the Lambro. It is a wide sandy beach by the incomparable views of the cape and the coast to Marina di Camerota, characterized in summer by the possibility to rent beach umbrellas and beach equipment.

Buondormire beach
The most evocative of the coves set in Palinuro, Cala Buondormire can be reached only by sea, and has a fine sand and clear, surrounded by sheer cliff overlooking those who dive in its crystal clear waters.

Arco Naturale beach
Outside the center of Palinuro, in the direction of Marina di Camerota, the beach arc, mixed sand / rock, is famous for the arc from which it takes its name, a majestic building that encloses a rocky cove untouched resting place for the gulls and the swallows that nest here numerous.